Another year has come and gone, which means it’s time for another review. I still can’t believe this is the fourth year I’m doing this. You can find my previous year reviews here: 2013, 2012 and 2011.

When I first quit my job to go traveling in late 2011, I was so excited for what lay ahead of me in terms of all the places I’d get to visit throughout Taiwan! Despite my exuberance, I have to admit that throughout it all, a part of me worried about how taking time off from the workforce would affect my career.

Looking back at it all, I can honestly say that there really wasn’t anything to worry about. 2014 was a fantastic year for my career! Whereas 2012 and 2013 may have been years of career experimentation, I definitely took some strides into finding a career in digital marketing that’s stimulating, challenging, but most importantly: rewarding. Looking forward to another exciting 2015!

I had much higher expectations for this past year: being able to complete the minimum requirements for the marine corps physical fitness exam and running a half-marathon in under 2 hours. Although I didn’t meet both of those goals, the decision to work towards those goals helped instill in me the importance of regular physical activity, which I’ve been able to maintain fairly consistently over the past year.

Sticking to my goals

Although I began the year with a enthusiasm to achieve my goals, by the end of it, I had failed to accomplish any of them. I think for this upcoming year, I’ll continue to set goals, but rather than focusing my efforts on the goals themselves, my focus will be on the systems that’ll help me achieve them.

I’ve definitely made progress on this front, but I’m still disappointed at finding that balance between saving and investing versus spending and enjoying life.

Pretty simple on this one: more traveling, more running, more writing, improving my Chinese and learning to code. I plan to write about this in more detail in an upcoming post.

Goal #1: Paid off the remainder of my student loans.

I entered 2014 with roughly $42k in student loans. I did not expect this was going to be achievable. But goals are all about being SMART, right? Anyway, according to my Mint account, this past year I paid off another $14k in student loans — roughly ⅓ of my remaining balance. Although I didn’t completely reach my goal for paying them off, I certainly made a lot of progress, particularly considering the fact that I graduated about 4.5 years ago with about $80k in student loans!!

Goal #2: Ran a half marathon in under two hours.

Around this time last year, I had just purchased the Rock N Roll Marathon Series’ 3 Tour Pass. At $199, I thought the pass was a good deal considering some of their races can get up to $125 if you register at the last minute. Moreover, considering I had ran my first ever half-marathon earlier that year, the Navy-Air Force Half Marathon, and finished the race at about 02:30:00, I thought completing the race under 2 hours was certainly a reasonable goal.

Unfortunately, I didn’t succeed in meeting this goal either. Due to several reasons, I ended up only completing two half marathons instead of three (the DC and Virginia Beach Rock N Roll half-marathons). Although I didn’t make it under 2 hours, my time for both races improved, including a new PR at the Virginia Beach race at about 02:17:00. I may not have achieved my goal, but I’m glad that my time improved! 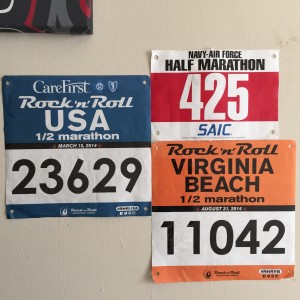 My bibs of the half-marathons I’ve completed so far.

This goal was another bit of a stretch. A part of me has always been interested in one day joining the military as a reserve officer. While I’m skeptical on that actually happening, being able to complete the minimum requirements of the marine corps fitness test seemed like a nice and clean SMART goal to commit to.

Anyway, I completely didn’t hit this goal at all. At the beginning of the year, I made an attempt, starting with the P90x videos (which I only got up to the 2nd week) and attempting to go to the gym at least 3 times a week. Despite the effort, I can still barely do one pull up!!

The year 2012 was the year that I started trying to learn how to code. Since then, I think I’ve made very little progress in getting myself to a point where I could deploy something. At the beginning of the year, I set my goal to launch teamdone.io. Whereas in 2013 I lacked a clear reason why I wanted to learn to code, I begun 2014 with clear expectations in mind: build.

I started the year off fairly confidently, completing some very basic wireframes for the app. However, by June, the project hadn’t been touched in months. I had a brief stroke of confidence come over me in July and again in October when I attended WDS and the ReUP Weekend, but after fielding a market research survey to see if there was even a market demand for the product, my confidence towards the project took a heavy blow. For now, I’m putting the teamdone.io project on hold, or at least until I can identify a product that better fits market need.

Goal #5: Attended mass at least once a month.

Goal #6: Blogged about my journeys as a marketer / researcher / traveler at least once a month.

Like attending mass, I thought this one was going to be also pretty easy to commit to. After all, I’ve had these last two goals as something on my annual list since I began. As you can tell from my archives page, I only wrote 6 posts this year! I was certainly not short on things to talk about, but I never fully committed to following through on this goal.

Is there a silver lining to all of this?

On the surface, it’s pretty clear that I’m 0/6 on achieving my goals for this year. However, after logging and publicly sharing my goals for the past three years, I’ve grown appreciative of how important it is to just start and commit to something. Even if the goal was never achieved, just trying to achieve the goal itself can lead to some pretty cool things that would’ve not happened in the first place. It certainly was the case for me:

Key takeaways from another year of goal-setting

In the next couple days, I’ll be sharing with you a recap of my year in general, as well as my goals for the upcoming year. Stay tuned!

Well, it’s exactly halfway through 2014! Here’s a look at how I’m progressing in each of my goals laid out for the year:

For the remainder of the year, I’m going to try to simplify most of my goals into three categories: financial, fitness and personal. Here’s to another six months!

I’m trying something new this year. Rather than establishing quarterly goals as I’ve done in the previous years, I’m going to break them into smaller, monthly commitments. With that in mind, by the end of January, I’d like to say I: